How Rock Choir kick-started Words for the Wounded

A couple of years ago I watched an episode of Harry's Arctic Heroes. After which, as the daughter of an RAF bloke, I wanted to do something to help the rehabilitation of wounded troops, but what? The following week I was sitting at a Rock Choir rehearsal in a quiet moment (rare but it happens!) and pondered Caroline Redman Lusher, the founder of what has become a cracking national Rock Choir. Caroline, a successful solo artist, - see her on the left - was intent on providing an outlet for those who wanted to take part in performance singing but who were scared to death of auditions. That's me, and many like me. From small beginnings this impressive professionally trained musician has created a new singing culture with over 16000 members around the country and it's still growing.
Back then, as we stood to sing under our High Wycombe leader's, (Katy Seath), amazing and amusing direction, I knew that of course, as an author and creative writing tutor,  I could do something. Nothing as big initially perhaps, but something. So I borrowed an idea from my founding of the charitable Yeovil Literary Prize and dreamed up Words for the Wounded which raises money for the rehabilitation of wounded troops through writing competitions and donations. I chatted about it to Tracy Baines, a successful commercial fiction writer, Penny Deacon, another author, and Matt Pain, and we decided it would work. Not to mention Dick Graham, (him indoors) who, crucially, agreed to do our website. We had a founding team. We gathered up amazing patrons such as Julian and Emma Fellowes, Paddy Ashdown, Lt Ian Thornton, Katie Fforde, Elizabeth Buchan, Katharine McMahon and many others. But we had no-one from the music world. Would Caroline Redman Lusher join us? 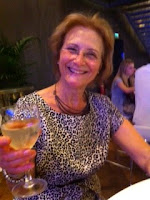 Indeed she would, and has been enormously generous in her offers of support ever since. Yesterday at the 02 Arena I was there at the Rock Choir Concert, not as a singer as I should have been, but as a guest of Caroline's, representing Words for the Wounded. You can see how much I'm enjoying myself. We took a photo of me with Caroline but our new iphone 'jacket' subverted the flash so you're stuck with me and a glass of wine, toasting you all.
It was an awe-inspiring evening. There was not a spare seat in the Arena, our leaders and Caroline sang on stage for 3 hours in total, and so did the Rock Choirs and their families, and so did I. Margaret Graham rocked! 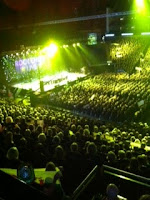 So much can be achieved if we believe in what we do. Caroline believes in the power of performance choirs, and we at Words for the Wounded believe that those who enter our competitions can change the lives of servicemen,(every penny of the entry fee goes to them). Not only that, our entrants can grow their own talents and if they win W4W Writing Prize, they have that accolade for their CVs. Remember, if you don't want to write, then you can always donate. Our troops need us. Last year we had 425 entries. This year, let's follow Caroline's example and grow, and the same again and again with every passing year. Thank you Caroline, for your support, your generosity and for your vision that has brought so much joy to so many singers! And thank you, all our supporters out there. Let's continue to make a difference.
Posted by margaret at 08:27