Our writing competitions are looming, and open on November 11th so the mail shots will begin. Gear yourself, fellow grannies! This year we have added the Independent Author Book Award. So now there is a short and a long opportunity. On November 11th we will post more about that but our website has the details. Do help these wonderful men and women who Words for the Wounded does its best to help.
It's been a really busy time for the grannies who run WforW.
Penny Deacon has finished the first draft of her crime novel, I'll Swing for You,  and I have seen my 15th novel published by Random House, Easterleigh Hall, which is the first of three which follow the lives of two families in the north east.  I've had the greatest time researching it, because I had to go back up north which is where my mum lived, and which I love.
Of course we had to celebrate the launch at The Wellington on the Strand (The Wellie) with a few friends, including he who must be disobeyed, and our third grannie, Jan Speedie. 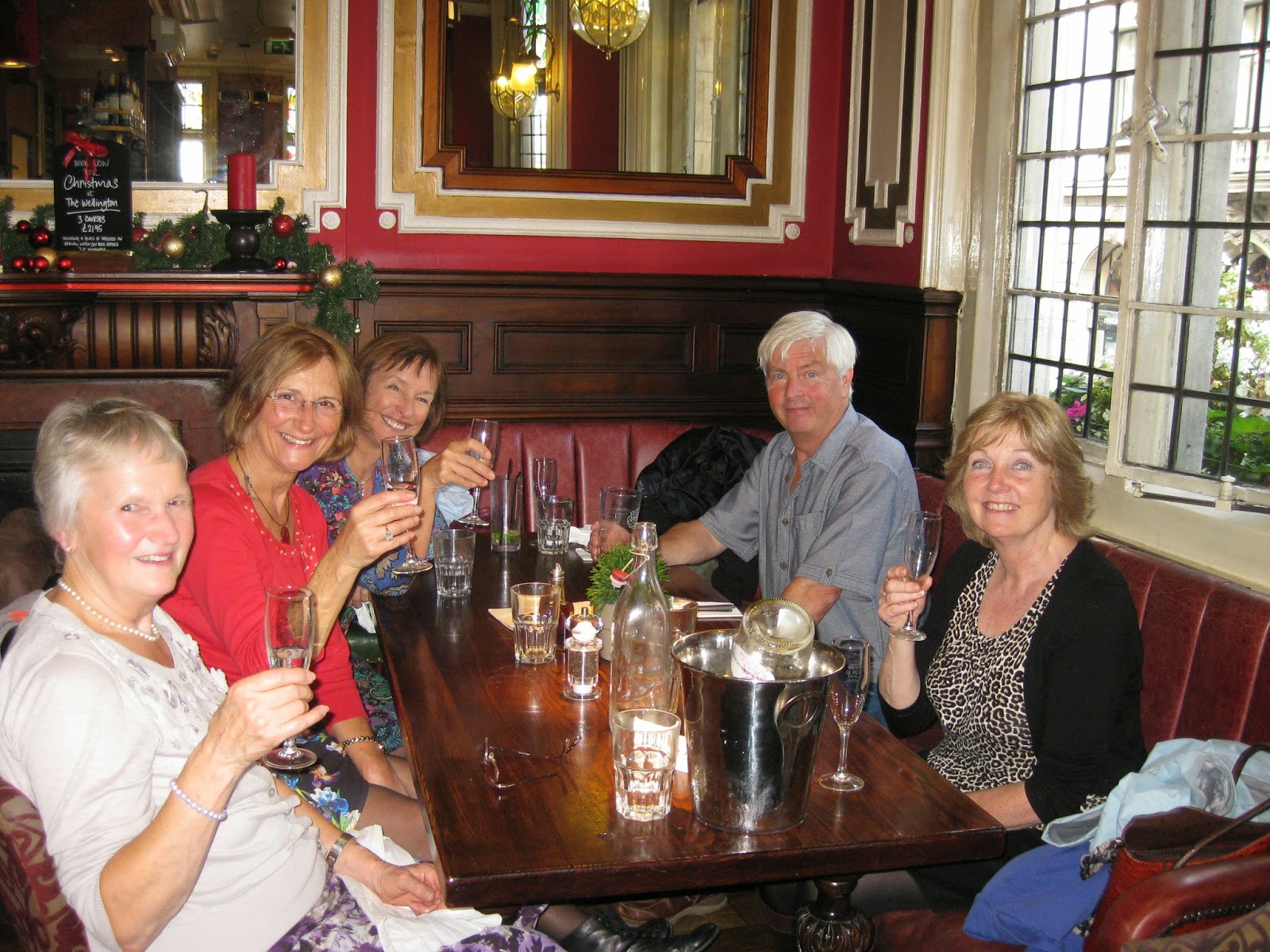 From the left: Janet Speedie, Margaret Graham, Pat Heath, Dick Graham and Sue Atkins. (Thanks to Sue for some of the photos below). Thanks to our friend, Esther, for taking the photo and looking after us so well, as always, and to The Wellie for the bottle of Prosecco.

We had spent the morning at the Tower of London, seeing the poppies. I have posted the article I wrote for, Frost Magazine which is a great online magazine and what's more supports, Words for the Wounded with publicity.
I will be posting on 11th November again, with more about our competitions and something about our LitFest in April, but for which we already have reservations. We have Katie Fforde, and two Midsomer Murder writers, an agent, a crime writer and a self-publishing panel. Random House, my publisher are donating new books for the prize draw. Frost Magazine are supporting us with publicity. You can find details on our website. 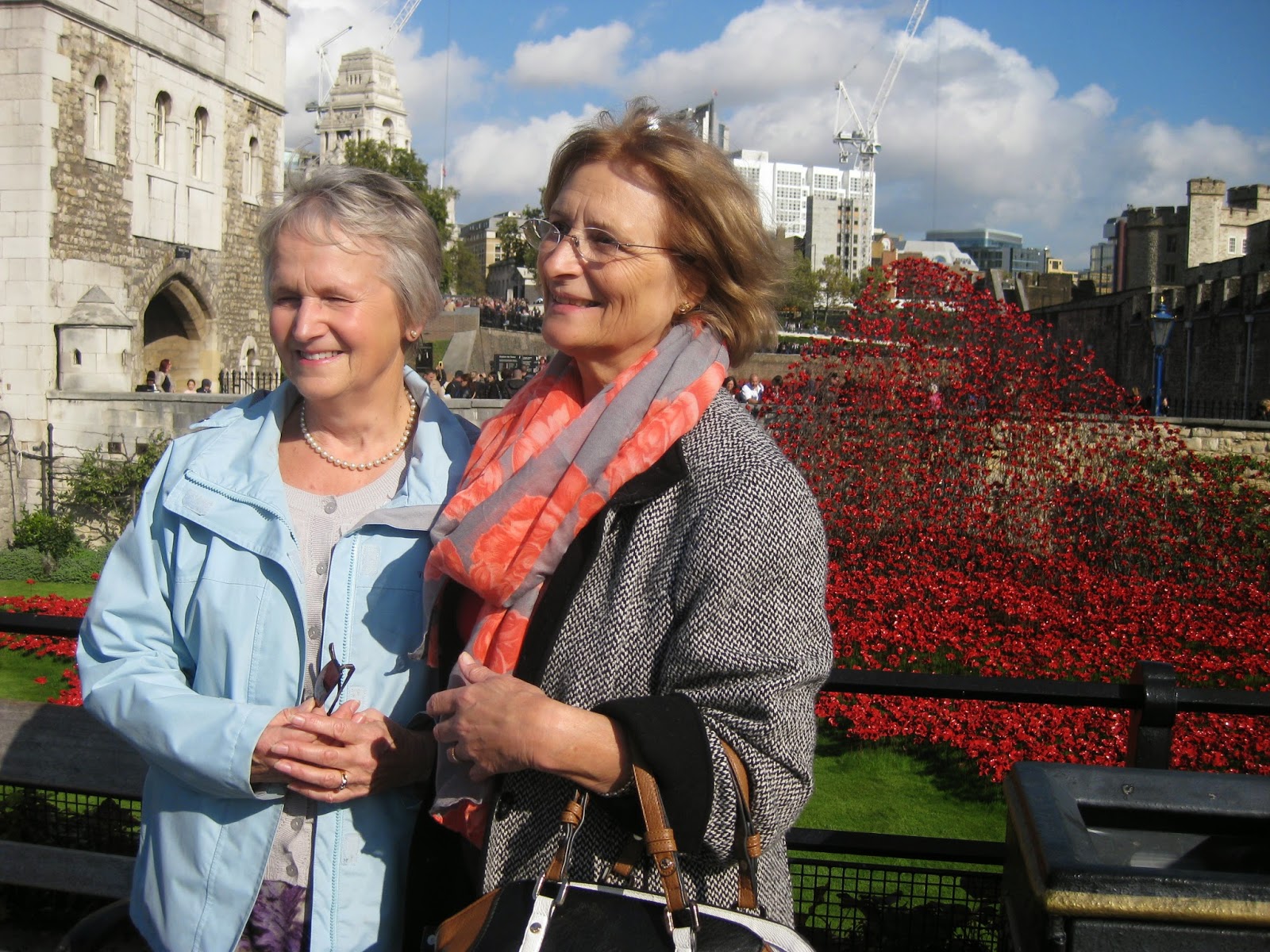 Two of the grannies at the Tower.Jan Speedie and Margaret Graham

The art installation commemorates Britain's involvement in the First World War, a war to which so many marched in the early days, certain that it would ‘be over by Christmas’.  It was not to be, of course. The war ended four years later at 11.00 am on the 11 day of the 11 month of 1918. 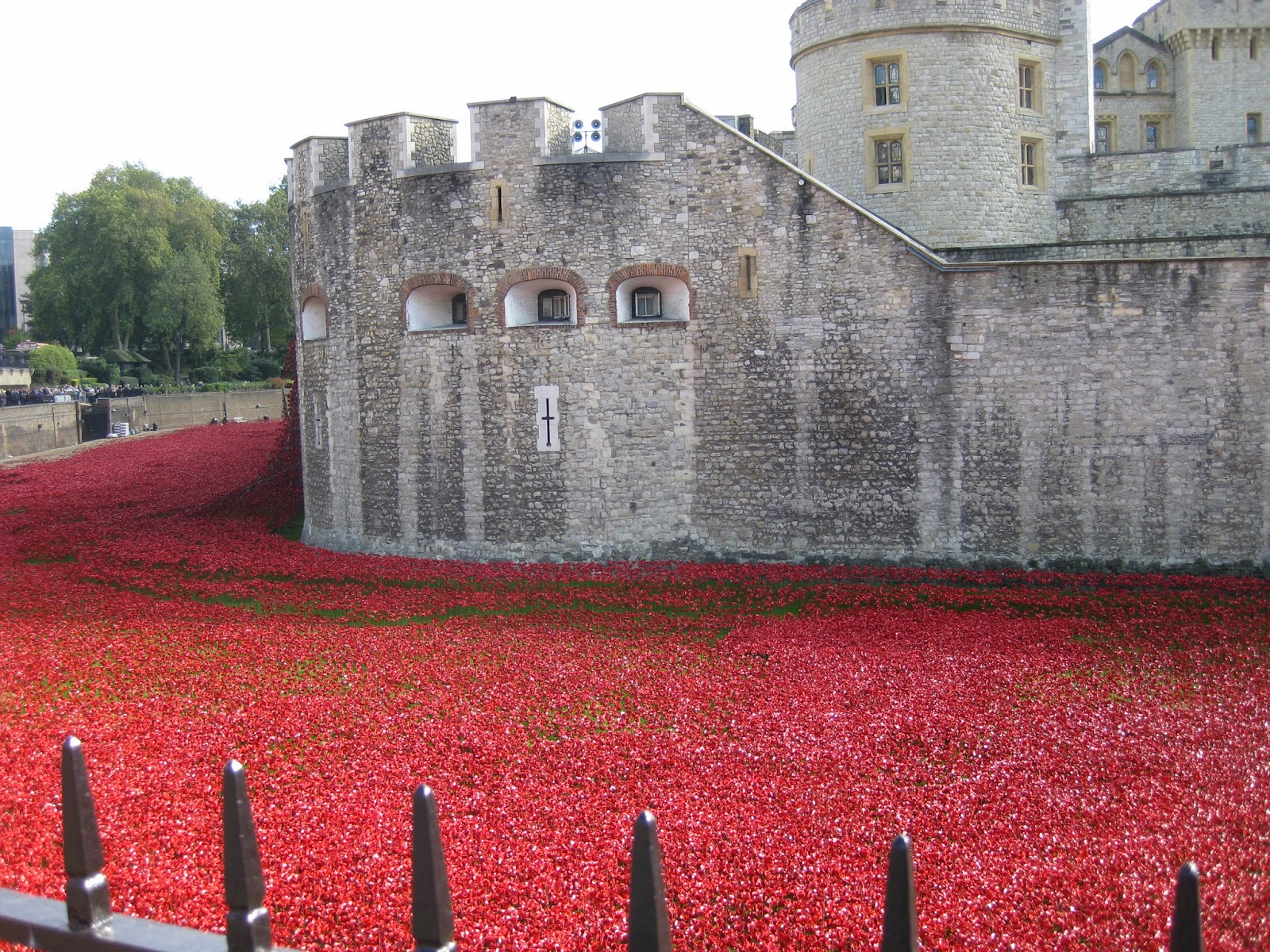 And these represent only some of our fallen.

One of those who went early to war, was a Derbyshire man who died in Flanders. He wrote in his will, knowing that everyone was dead and he was surrounded by blood, The Blood Swept lands and seas of red, where angels fear to tread. It is these words that inspired ceramic artist Paul Cummins’s design. 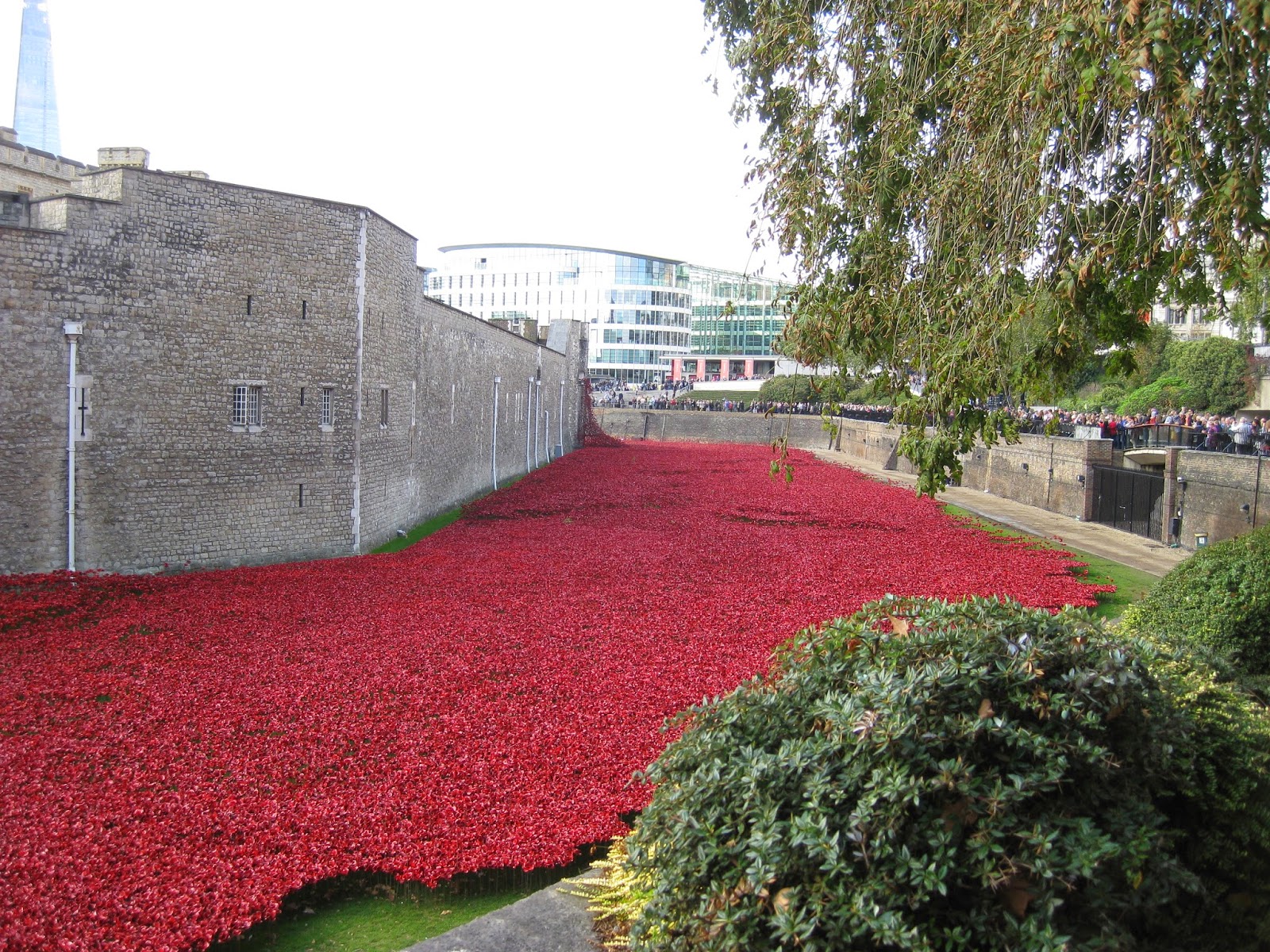 In those trenches, classes mixed for the first time, barriers were broken, lives were destroyed. ((888,246 British and Colonial dead) many many others were injured, mentally and physically . It was a defining moment in our history, if you could call such relentless effort and sacrifice a moment.
The setting was designed by stage designer Tom Piper. In total, 888,246 ceramic poppies will progressively fill the iconic Tower's moat over the summer. One for every single man who was lost. Volunteers fix the stems and plant out the poppies, for sale for £25. In due course, the poppies will be packaged and posted to the purchasers, again by the volunteers.  Bravo the volunteers. 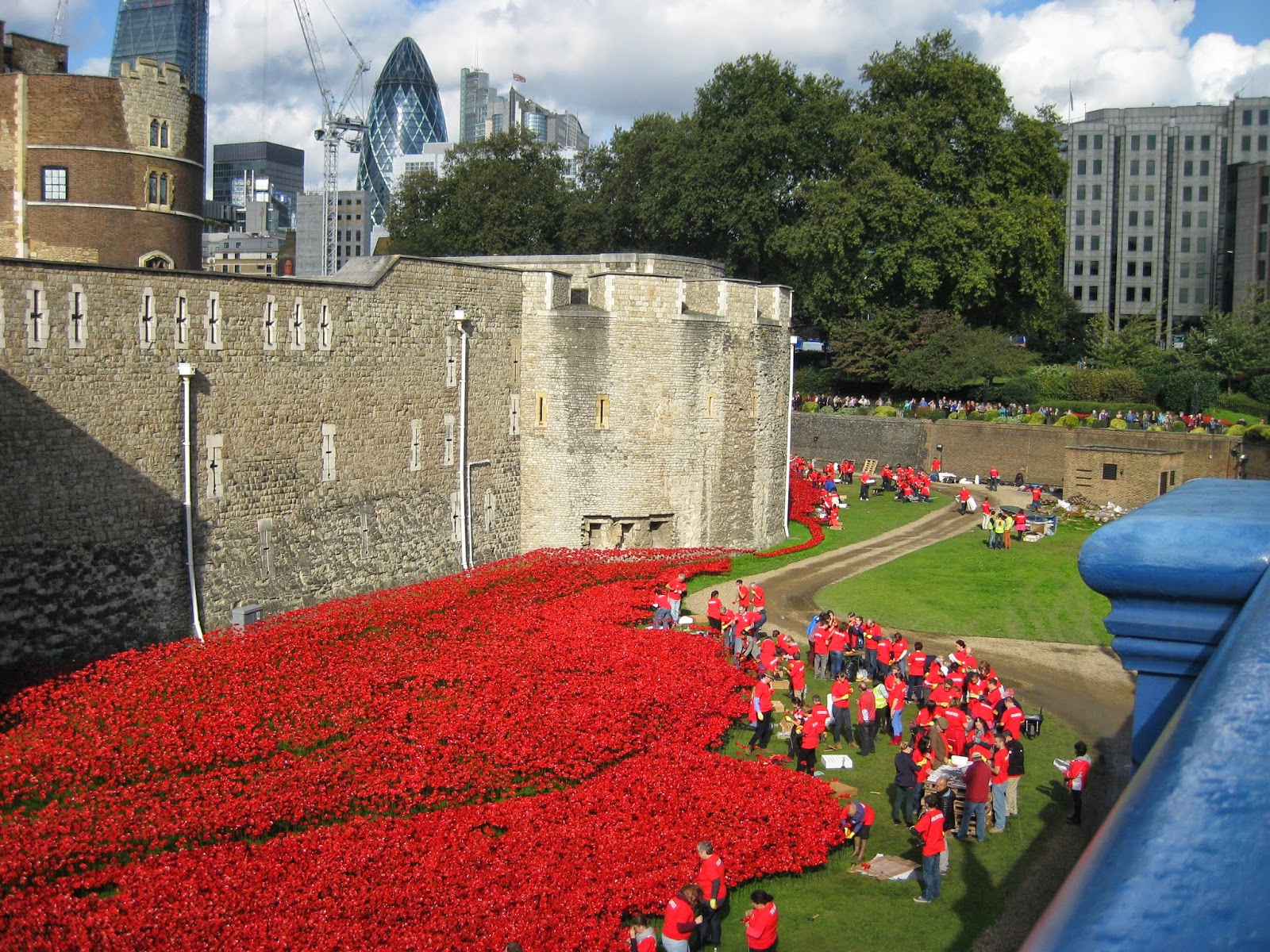 By yesterday the tide of poppies had extended in some areas to the edge of the moat, and in others, were lapping towards the walls,  but there is room and time for more, just as there was, sadly, time for more in that First World War.

It is a heart stopping vision, one that promotes a moment of deep reflection, of commemoration, and for the grannies a determination to continue with our voluntary work - raising funds for the recovery of injured troops, so on with the mail shots for our fundraising writing competitions opening on 11th November.
I believe the last poppy will be planted on the cusp of 11 November. 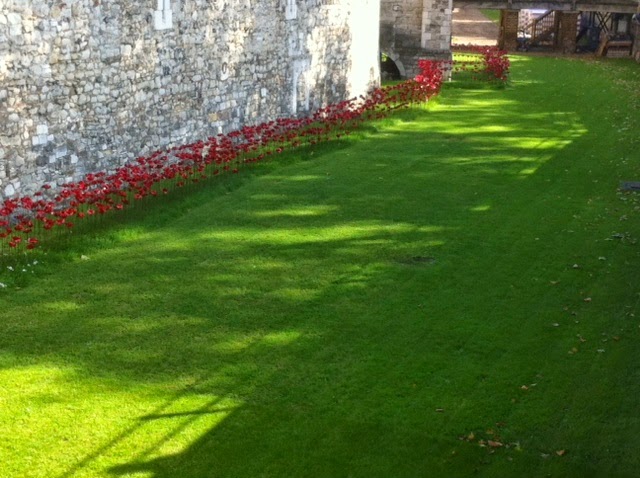 The start of a new wave

The Tower of London website says ‘We are hoping to sell all of the poppies that make up the installation and, in doing so, raise millions of pounds which will be shared equally amongst six service charities.’

I would love to know exactly how much is distributed as our servicemen, and ex-servicemen are still sorely in need.