It's high time I wrote about the stunningly successful Yeovil Literary Festival which began on 19th September. There was a terrific line up of writing stars including Tony Robinson, Sante Montefiore, Paddy Ashdown and Michael Morpurgo.  The event was organised by Adam Burgan, Manager of The Octagon, Marcus Bishop Manager of Yeovil Waterstones and Liz Pike, doyenne of the Yeovil Community Arts Association and Yeovil Literary Prize.

Tony Robinson's session at The Octagon brought tears to the eyes of Marcus, my old mate and partner in crime. We used to do a lot of events together. The tears? He told me it was because Tony connected so effortlessly with the children and captured their imaginations. I missed it unfortunately as I was still on my way down from High Wycombe. Why is it that good things happen on the same day. 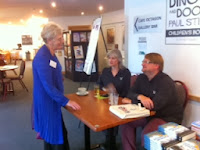 I was chairing a history event on my home territory and at lunch handed over to Sylvia, my Chair of Vice, as she likes to be called and galloped on down to Somerset. I made it just in time for the Literary Dinner hosted by the Yeovil Community Arts Association which I ran a few years ago, and of which I am Patron. It is now led by Liz Pike, who is a force of nature. Here she is, talking to Marcus and Hazel, the management team of Watersones, Yeovil.

Santa Montefiore was our speaker at the Literary Dinner held at The Manor Hotel. How very dare such a slim elegant package be such a funny, erudite and charming person. It's totally not fair. We all loved her 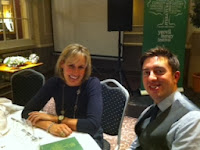 stories, and enjoy her books, the latest of which is Secrets of the Lighthouse. She is sitting here with Adam Burgen, my new best friend. He did the most amazing job with the Literary Festival and he and Sean, his assistant, steered it throughout the weekend. The Manor Hotel sponsored the dinner, the proceeds going to the YCAA, a charity that provides funds for the creative arts of the area. I found myself there in between sessions eating, having the odd glass of wine and enjoying the cappuccinos. I am known as a pain in the neck where cappuccinos are concerned, and The Manor passed with flying colours.

Tracy Baines and I ran a workshop and a number 1-2-1 editorial sessions on Saturday at The Octagon Theatre, in the Johnson Studio to raise funds for  Words for the Wounded. The standard of work was exemplary and the enthusiasm boundless. It's so exciting to meet aspiring authors who are willing to work hard to improve. It leads to a lot of fun and is always stimulating. There was quite a presence from the Yeovil Creative Writers (google Yeovil Writers) who go from strength to strength. 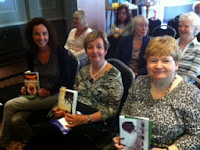 Before that there was a celebratory reading at The Manor by past and present prize winners of the Yeovil Literary Prize, all of whom are now published. From the left, Kate Kelly, Jackie Gingell and Babs Morton. Kate and Jackie I know well, and Babs had come down from the North East for the occasion and I found myself sitting next to her at the Michael Morpurgo evening. The North East is my family's stamping ground and it was great to chat. 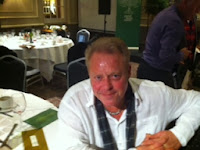 Joining them was this year's winner, Sion Wilson, here on the left,  who has written a cracking novel and we wish him all the best with it. We had several others reading their work, including Chip Tolson who came second in the Stage Play Prize judged by Julian Fellowes some years ago. This was organised by the YCAA with The Octagon Theatre. Later in the day Paddy Ashdown, one of Words for the Wounded's patrons talked about his book on the Cockleshell Heroes. A Brilliant Little Operation.  Read it, it's fascinating.
At the Manor whilst sipping a glass of wine with Shelagh Mazey, author of the successfully self-published Dawn to Deadly Nightshade I spied Steve Haigh, late of BBC Somerset Sound who has decided he doesn't do retirement and is working on The Conduit, a local arts magazine. There were so many authors and everyone fascinating but I missed far too many. It's tricky when you're actually working and you can only dip in from time to time. I will do better next year.

Finally Michael Morpurgo and a trio of singers put on a stirring narration of Private Peaceful on stage at The Octagon. Michael's funny, poignant and ultimately heartbreaking reading - well, acting - of his novel, interspersed by songs from the period was an extraordinary theatrical experience. I can honestly say that it was the most impressive theatre I have seen for many years, and a most satisfying finale to the first Yeovil Festival one could imagine. Of course I cried. I do wish I could do it elegantly but as Babs Morton, sitting next to me, would testify I am a noisy mess.

So, this has just been a taste of the Yeovil Literary Festival, which is to be the first of many. So readers and writers, do come next year. It was a total success and Yeovil is still buzzing. One day, if all you aspiring authors out there keep working, keep writing, keep entering competitions, keep developing your craft you will be one of the speakers, making us laugh, cry and nod in agreement.

Don't forget, Words for the Wounded writing competition will be open for entries on 11 November. WE NEED YOU!  Try your luck, support our wounded, sharpen those pens, flex those typing fingers and rev up your creative imaginations, remember the universal shape, strong characters, living breathing scenes. (Check some of our earlier tips and those below). See you next year at the Yeovil Literary Festival and allow me the privilege of reading your work at Words for the Wounded.

Our next blog will be by our guest Jackie Gingell who will include some of her own writing tips. Make sure you tune in.

In my first novel, now called After the Storm and re-issued in August, there are times in scenes when I view the action from more than one person's point of view. Though this is often done in novel writing it is not a good idea because it weakens reader identification and empathy. Try to stay within one person per scene so the reader totally buys in to that one person's experience. For instance.

Annie wondered who this strange man was, reaching for her hand, his face white and sad. Archie looked at her, dear God, I would have passed my own child in the street.

Here we are seeing the scene from two people's point of view.

It would have been more empathetic to have separated them and stayed with Annie until she had taken the hand, received her father's words. 'Hello Annie. I'm your father.' You would then remain with Annie absorbing her reactions and moving on through the scene to the end. At that point you could have a two line space and go into Archie's scene where we receive his feelings and thoughts on the subject.

This is especially important in a short story in which there is usually only one point of view.

Hope this is helpful.

Posted by margaret at 01:00 No comments:

Gosh, just the thought of listening to how someone has run a marathon is enough to exhaust me! I’d love to say I was one of these people who are the first to sign up for sponsored walks, runs or swims but I’m not.  In fact the last time I did a sponsored walk was in 1978. The day before, I bought myself a nice new pair of trainers, white with a red flash. First mistake. After 4 miles the skin was off my heels and the red flash was the blood seeping up my socks. The walk was through country lanes mostly, although I recall that the cluster of people I was with (the laggers) got lost, as we ended up walking through ploughed fields and surely that wasn’t on the route?  I soldiered on for the remaining 22 miles, my only panic that the organisers would leave without us. The sight of the coach waiting to take us home was such a relief I almost ran to it.  As I soaked in a hot bath that night,  wearing my socks – the only way I could get them off was to soak them and prise them away – I thought the worst was over. And it was, until the next morning when I could not bend my rigid legs and had to manoeuvre myself down our very steep stairs for breakfast. Not surprising that I never attempted another is it?

So in future, all my charitable efforts were mainly sedentary. Sponsored silences (very difficult), sponsored bakes, sponsored discos. I diligently collected old keys and bottle tops for the Blue Peter Appeal, year in, year out. I’ll put money in every charity box I pass,  get the stickers, buy fifteen poppies and fifteen pins each November. Anything that doesn’t involve trainers and I’m in.

That’s why I think having a writing prize is such a good thing. It gives those of us who want to do their bit for charity but aren’t of an athletic disposition a chance to get involved. You can contribute your words as well as your money – and you don’t get blisters!

Writing is a lot like running a marathon. The lesson I should have learnt all those years ago was to be prepared and to do my homework/training. I should have bought my trainers long before the walk and worn them in so that they were comfortable on the day - or better still bought some good strong walking boots. I should have started doing short walks over time and built my stamina and endurance for something more substantial. Writing's the same in many ways. You can't just dive in and expect to write a novel straight off. You might wander along a few wrong paths, get a few blisters but you're learning all the time, a better way to do things, a clearer way of expressing your thoughts and ideas.

Flash fiction is a great way of getting writing, letting those ideas pour out onto the page. But it's no less a skill than any other writing. You have to put the work in, get your bum on the seat and sit there, shaping your words until they express what you want to share with the world. Give yourself a head start on this year's competition and get laying those words down on the page. Get yourself in training, building your stamina, day by day. Don't leave it until the last minute like I did all those years ago. You'll get blisters.

So here are my tips for building stamina in your writing. Lots of people think you need to set aside two or three hours to write but that's not necessarily true. We all have busy lives and where are we going to find all those extra  minutes let alone hours? Start small and build up to longer sessions. We can all find ten minutes while we are standing at the bus stop, sitting in the car waiting to collect the kids from school or waiting for the kettle to boil. The trick is to have a pen and paper at the ready at all times so we can make use of those precious minutes. Try to make it a regular appointment with yourself, the same ten minutes, each and everyday. Once you have the habit of writing regularly you can extend that time to fifteen minutes, then twenty. Most people can write 200 words in ten minutes. Times that by 5 and you have 1,000 words - or two flash fiction entries to work on. What's stopping you! Get writing!