As you all know, we at Words for the Wounded are determined to create opportunities for aspiring writers as well as raising funds for the recovery of the wounded.

This year we are introducing The Independent Author Book Award for self-published novels and memoirs (for children or adults) in response to requests we have received. Full details are on our website.

We are thrilled that this year Palamedes PR are sponsoring our top three places.

1st prize is a professional press release, and 2nd and 3rd have the opportunity of a discounted press release.

Palamedes is a shining star in the public relations world, and a press release from such an organisation will be like a dream come true to any independent author.


This is not all. We have been offered sponsorship by the razor sharp and increasingly popular lifestyle Frost Magazine, an online magazine, whose editor and owner, Catherine Balavage is going to

review each of the top three. In addition, Frost is continuing its amazing support for Words for the Wounded's efforts through ongoing publicity and we, the grannies of Words for the Wounded, consider ourselves enormously privileged. Entry fee £12.50. Closing date 11 March 2015

But that's not all. Our short prize is also launched today, with the ever popular Writers Forum Magazine  publishing the winning entries.

Further details are available on our website. Please, please spread the word in this commemorative year, one  that has drawn attention to the horror of war and its aftermath. Though we have withdrawn from Afghanistan those injured still have battles to fight, and will be doing so for a long time. It is essential therefore, that fundraising continues for as long as it is needed. This year we are raising funds for Combat Stress, Forces Support and the creative arts at Tedworth House Recovery Centre.

No doubt the daft grannies will be going white water rafting or something similar after this year's skydive, which raised additional funds. Giving writers opportunities, however, is always close to our hearts, and if we can combine fundraising with that, we are more than pleased.

And now we move on to Katie Medina, an exciting new talent who has written this post especially for the launch of this year's competitions, and I leave the last words to her. (Crikey, isn't she young!)

My parents have a photograph of me, aged seven, sporting a crew cut, an Army camouflage outfit and a mad grin.  I was an outdoorsy, wild child and always wanted to be a soldier – which is probably why I ended up spending five years in the Territorial Army and working for Jane's Information Group, the world's leading publisher of defence intelligence information.  My parents were nonplussed by my obsession because our family has no military background.  However, my interest probably developed from the many hours I spent hiding behind the sofa when I was supposed to be asleep, watching such World War 2 classics as Bridge On the River Kwai and The Dirty Dozen through my dad’s legs.
It was my involvement with and interest in the military that led me to write my first novel, White Crocodile, a thriller set in the landmine fields of northern Cambodia, which was published in August, by Faber and Faber. 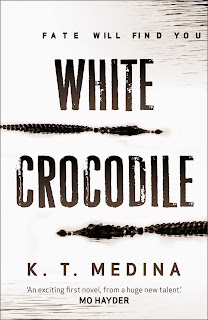 White Crocodile came out of personal experience: a month spent working in Cambodia with a wonderful and highly dedicated British based mine clearance charity, Mines Advisory Group.  Whilst in Battambang Province, I was privileged to spend time with both Western and Khmer clearers and to meet Khmers who had lost limbs to land mines.  There are huge numbers of amputees in Cambodia, including very young children who, in many cases, thought that the anti-personnel mine they found was a toy.  Off the tourist trail, Cambodia is a heartbreaking place to visit and left a huge and lasting impression on me.
It is mines and IEDs – improvised explosive devices – that seem to do most of the damage to our troops currently serving in Middle-Eastern conflicts.  It must be psychologically devastating to be a physically fit, ‘Alpha’ person, and then to be grievously injured, and the wounded must be helped to regain their independence and self-confidence, so that they can lead fulfilling lives - albeit lives that will be very different from the ones that they dreamed about when they were children.
I was probably lucky to be in the Territorial Army between wars: after the first Iraq War and before the next intervention in Iraq and in Afghanistan.  Perhaps it always was, but war feels particularly dirty these days, with an enemy who is potentially anybody and everywhere and who doesn’t comply with the Geneva Convention.  It is disturbing to know that young men and women – often just teenagers or early twenties – are exposed to such potentially physically and psychologically devastating harm in these dirty conflicts.
Today, as the situation deteriorates in Iraq - the country where the current unraveling of security across the Middle East started with Saddam Hussein’s overthrow in 2003 - and in Syria, with the seemingly unstoppable advance of ISIL, I fear that our military may soon be facing another ‘on the ground’ challenge against a particularly brutal and morally corrupt enemy.  It is critical now, more than ever, that we as civilians support the young men and women who have given so much in these conflicts.


Remember, spread the word. Every penny counts, and every penny raised goes to those in need.