My fantastic son-in-law Kris Dore and his equally amazing mate, Lee Read, volunteered to participate in the Eton Dorney Triathlon to raise funds for Words for the Wounded, in particular to raise funds for the prize money for the W4W writing competition. A fair bit of training took place during some of the hottest weather recently and the language was interesting!

The big day came and the weather continued in its glorious vein - baking hot. I went with 'him indoors', and Martin, father of Megan and Josie, two of the grandchildren and avid supporters of Words for the Wounded, (and ice cream). Once there, after a diversion to admire the scenery (or because we were lost - the Sat Nav not deemed necessary by him who must be obeyed - ho hum) the air of excitement all around was palpable, and already the earlier races were underway. Our heroes were doing the sprint at 1.30.

We'd packed a picnic of course. I find that I (Margaret-greedy-Graham )can't go anywhere without 'just in case' supplies. Do I really think I will totally starve in a couple of hours? Well, clearly yes. This is why I take massive supplies if I drive for any length of time. We settled near the swimming starting line, (it's the lake used for the 2012 Olympic rowing) dashed to the portable loos - best no comment here but one day I will write a guide to the best, and bumped into Kris, Lee, Annie and Michelle so all ended up around the picnic. There, you see, I was right to bring it!
Then the lads donned wet suits, and were off. 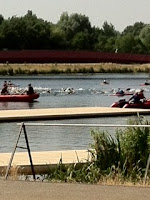 We couldn't spot them in amongst the thrashing of arms but it seemed a long long way. Apparently the temperature was close to twenty two degrees in the water which gives some indication of the temperatures during our little burst of summer. I have to say that Meg and I who were the photographers of the group gave loud cheers to the women too who were giving their all and doing incredibly well. But back to our boys: we saw them leave the lake in the middle of the pack, stripping off their wetsuits as they ran for the bikes. They said that the change overs were the trickiest of all. Then off for their laps, in the searing heat with us cheering them on, and trying to take photos. So swift were they that Meg and I had rather a lot of blank spots, and could only say - that should have been Lee, or Kris!
They pulled up a fair bit of time on the cycling and then they were into the run. By this time we were wondering how much longer we, the cheer leaders, could cope with the heat so what must it have been like for the athletes?
How on earth our boys did it I don't know, but they moved up many places during the run and crossed the finishing line pretty near the front of the pack and within seconds of one another, feeling pretty rough, it has to be said. Our ice cream queens joined them for a photograph wearing the W4W T shirts. Congratulations didn't quite include sharing the cones. Ah well! 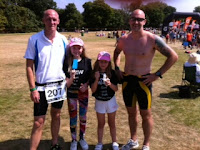 AND there was £280 in the pot for W4W. Stunning stunning effort. Words for the Wounded is so grateful. Only problem now is that Jan and I have to come up with something we can do next year. Sky Diving, or a L-O-N-G walk along the length of the Thames, even wing walking has been suggested. Hardest of all is a sponsored silence but we must stay within the realms of possibilities! Thank you to everyone who donated and to our heroes - bravo!
Posted by margaret at 09:24